This is the dilemma that most parents with young children may have; whether they should take a pram or not while on a family holiday. When going away with my eldest, I only ever took a pram as I did not use a carrier with him. However, with my youngest son, I have taken a carrier with us on pretty much all our holidays. Deciding whether or not to take a pram can be difficult to decide, so I have come up with a few checklist questions to help you decide.

SHOULD YOU TAKE A PRAM OR NOT? If you are going on holiday or travelling by car you would more than likely have space to put a pushchair – unless you take everything including the kitchen sink! You could do what I did in Bahrain and see how your child goes and if they struggle then buy one while you are away. Then either bring it back or ditch it before you return home.

Even if you are going in a car, a carrier does come in handy. When we have travelled by ferry I have left the pram in the car and put the youngest in a carrier. This meant I could walk up and down the ferry, take him outside and not have to lug around the pram. It also means on days out, that you can keep it in the car and decide when you are out and about if you want to use the carrier or not. A carrier has now become one of my must have essentials for a family holiday. 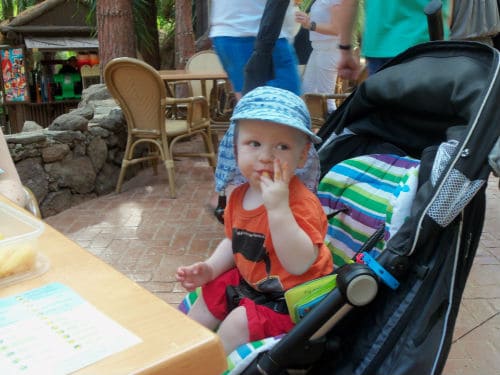 For flying it’s a more difficult choice as its extra luggage to take with you – although most airlines will let you take the pushchair free of charge (check with your airlines first!) In my opinion it isn’t difficult to get your pram through security or around the airport. You will more than likely though have to take your child out of the pram to get through security as they normally ask you to fold the pushchair. Which can be a pain if they are sleeping.

I have used our Boba 4G carrier at the airport which did indeed come in handy. However, be aware that you may have to take your baby/child out of the carrier to go through security. One occasion my youngest had fallen fast asleep and I just had to get patted down (I don’t think this is the norm, but I must have had the look on my face and they decided not to ask me to remove him).

Other things to consider:

When you are out and about a pram may not be ideal if the places you are going have rough grounds. Cobbled streets can be a pain for parents and children with how bumpy it can get.

If you little one still takes a nap where will they sleep? Are they used to sleeping in a pram or carrier? Or are you lucky and you have a child that will sleep anywhere?

What will you be doing while on holiday? Walking around town? Going sightseeing? Hiking? Doing more extreme activities? Think about what you will be doing and try and decide if you will need a pram, carrier or both.

Are you any closer to deciding? Do you have a preference for one over the other? Well for me with my youngest son I take both a pram and a carrier. I tend to find both come in very handy when out on a holiday that leaving one behind just doesn’t make sense for me.  Although on a family cycling holiday there is no point in a pram as we cannot use it during the day. This is where a carrier comes in much more useful!

Top Tip: I would, however, recommend not taking your expensive pram in case it was damaged by the airport staff. Taking a lightweight umbrella fold pram would be much more beneficial.

Have you ever taken your pram with you or did you decide to leave it at home?